“Creatures,” said the strong, happy voice of Aslan, “I give you the woods, the fruits, the rivers…” (C. S. Lewis in The Magician’s Nephew).

It's Autumn (except it's not; I started this essay in October) and the big "browns" are spawning in the Owyhee River, staging to begin their fall nesting ritual. You can see them excavating their redds (nests) in gravel beds. The nests are easy to spot: oval patches two to three feet wide showing gravel that's lighter in color than the surrounding stream bed.

Wise fishermen know that fish are spawning and try not to disturb them. They avoid walking on gravel bars where they might trample the eggs, or wading upstream from the nests where they might dislodge debris that can smother them. And, they don’t fish for these trout, though it’s tempting to do so: You can see them in the shallows, resting near their redds. 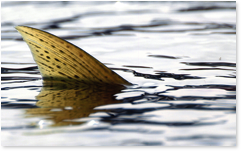 If these precautions seem strange to you, I can assure you that they’re part of an ethic that governs fishing here in the West and elsewhere. But there is a deeper cause.

The scriptures stress the fact that God has put creation under our care: "The Lord God took the man and put him in the garden of Eden to tend it and care for it" (Genesis 2:15). In the very beginning God called us to care for creation. This was, and continues to be, His will.

Back in the '70s I came across a remarkable little book entitled Pollution and the Death of Man (1970) in which Philosopher Francis Schaeffer argued that human sin lies behind every ecological disaster. Hosea, Israel's prophet, makes the same point: "(Men and women) break all bounds, and bloodshed follows bloodshed. Therefore the land mourns, and all who dwell in it languish, and also the beasts of the field and the birds of the heavens, and even the fish of the sea are taken away" (Hosea 4:4,9,10).

Schaeffer linked environmental stewardship with God's ultimate purpose to get all creation back on track. Scripture tells us that someday the earth will be “delivered from the bondage of corruption and brought into the glorious liberty of the children of God" (Cf., Romans 8:19-21). Schaeffer argued that “(The child of God) should be the one who—with God’s help and in the power of the Holy Spirit—is treating nature now in the direction of the way nature someday will be."

The world is ours to use. God told Adam and Eve, "Be fruitful and increase in number; fill the earth and subdue it. Rule over the fish of the sea and the birds of the air and over every living creature that moves on the ground” (Genesis 1:28). Creation is ours to use, but, as the old angler, Izaak Walton, put it, "We must use it as those who love it."

I muse on the work of God’s hands: a chukar calling across a canyon, a bull elk bugling up a fight, a grouchy, old bear grubbing for larvae in a rotten log, a peregrine falcon soaring in exuberant flight, a herd of antelope far off in the distance, a brook trout with its kaleidoscopic moles, a snow-white ermine with a tiny black tip on his tail, a busy beaver, dragging aspen branches to her lodge, a curious, young coyote, sitting on his haunches and watching me fish one morning, a mother otter playing in a stream with her pups, a mother fox at my back door, patiently waiting for a handout—I love all these things, for they have been given to me for my delight, out of my Father's great love.

And what I love, I protect.