Have you not known? Have you not heard?
The LORD is the everlasting God,
the Creator of the ends of the earth.
He does not faint or grow weary;
his understanding is unsearchable.
He gives power to the faint,
and to him who has no might he increases strength.
Even youths shall faint and be weary,
and young men shall fall exhausted;
but they who wait for the LORD shall renew (exchange) their strength;
they shall mount up with wings like eagles;
they shall run and not be weary;
they shall walk and not faint. (Isaiah 40:28-31)

I’ve often watched eagles soar o’er the Owyhee River, rising out of the canyon on thermal updrafts, scarcely flapping their wings, peerless examples of effortless strength and grace—reminding us that we too can rise above our busy days and duties; we can “run and not become weary.”

But, it’s worth noting, we can also “walk and not faint.” We can plod through monotonous, pedestrian days when we’re sheltering in place, distanced from family and friends, living in a house full of restless moppets, or living by ourselves—alone. In that place, as we rest in him we can “renew” (Heb: "exchange") our strength.

Our weariness and exhaustion for God’s inexhaustible strength. Ours for the asking. Such a deal we got!

Jacob was on the lam, fleeing from Esau’s wrath, and came to “no particular place,” as the Hebrew text suggests. As night was falling, he cleared a spot in the rubble-strewn ground, and found a flat rock on which to lay his head. He soon lapsed into a deep sleep in which he began to dream. In his dream Jacob saw a stairway, rising from the stone at his head, connecting heaven and earth.

The traditional ladder is such a favorite image it’s a shame to give it up, yet the picture of angels in ungainly apparel scrambling up and down the rungs of a ladder leaves much to be desired. The term usually translated “ladder” actually suggests a stairway or stone ramp like those that led to the top of ziggurats, the terraced pyramids raised to worship the gods of that era. The ziggurat with its steep stairway was a symbol of man’s efforts to plod his way up to God. It was hard work, but there was no other way to get help when you needed it (see Genesis 11:1–4).

It’s odd how that pagan notion has found its way into our theology. Some early Christian writers used the ladder as an analogy for spiritual progress, tracing the steps of Christian faith from one stage to another, rising higher by self effort. Walter Hilton’s literary classic The Ladder of Perfection is based on that notion. The  old camp-meeting song “We Are Climbing Jacob’s Ladder” draws on that association.
In each case the emphasis is on the ascent of man.

What arrested Jacob’s attention, however, was the fact that God had descended. He had come down the stairway and was standing next to him, for that’s the meaning of the adverb in 28:13. (“And behold, the LORD stood beside him.” The same Hebrew word is translated “nearby” in Genesis 18:2 and  “in front of,” in Genesis 45:1.)

God was standing beside him. The God of Jacob’s father, Isaac, and grandfather, Abraham, was in this lonely place with him, contrary to Jacob’s expectations and far from the traditional sites he normally associated with God’s presence. “Surely the Lord is in this place, and I was not aware of it,” Jacob declared with wide-eyed, childlike astonishment. “This [place] is none other than the house of God.”

Jacob got the message, but God was taking no chances. He highlighted the picture with a promise that would sustain Jacob through the long, weary days ahead: “I am with you and will watch over you wherever you go . . . I will not leave you until I have done what I have promised” (Genesis 28:15).
His promise is your promise as well. “God has said, ‘I will never leave you; I will never forsake you’” (Hebrews 13:5). He is present with you today—in the house or room where you find yourself sequestered, sheltering in place, isolated and alone. You can say of every site and circumstance, “Surely the Lord is in this place.”

G. K. Chesterton was asked by a reporter what he would say if Jesus were standing beside him. “He is,” Chesterton replied with calm assurance. 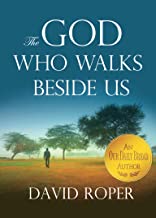 No Way Out but Through

“When you pass through the waters, I will be with you; and through the rivers, they shall not overwhelm you; when you walk through fire you will not be burned, and the flame will not consume you” (Isaiah 43:2).

We might wish that Isaiah had said, “You will never pass through floods or walk through fire,” but God has not promised to keep his children out of trouble. No, “we must through much tribulation enter the kingdom of God” (Acts 14:22)

I’m not wise enough to know the reasons for the present crisis, but if it is the judgment of God on the earth his children will of necessity suffer along with the world—in which case, there’s no way out of our trouble but through.

Nevertheless our Lord is with us when we walk through the fire and pass through the flood, lending his strength to our weakness, giving us peace in our unrest. The flood will not overwhelm us; we will not be consumed. We can pass through this crisis not somehow but triumphantly. We are “more than conquerors through him who loves us” (Romans 9:37).

“And Lot lifted up his eyes and saw that the Jordan Valley was well watered everywhere like the garden of the LORD, like the land of Egypt, in the direction of Zoar. (This was before the LORD destroyed Sodom and Gomorrah.) So Lot chose for himself the Jordan Valley…” (Genesis 13:10,11)

“Who you gonna believe, me or your lying eyes?” A cynical question…unless God is the one that asks it.

Lot cast his eyes on the steppes of Sodom, but he could not see it’s corruption. He “chose for himself” and lost everything worth having (Genesis 14:1-12)..

Abraham let God choose and got everything in the end (Genesis 13:14-18). God’s will is always better than trusting our lying eyes.

Faith instead of Fear

I have said these things to you, that in me you may have peace. In the world you will have tribulation. But take heart; I have overcome the world.” John 16:33

Hope not fear is the last word.

Sheltering in Place
I was watching the news on television last night and heard the Covid-19 pandemic described as a “terrifying seige.” I thought of the day Elisha and his servant were beseiged at Dothan (2 Kings 6:8-19).
Dothan was an insignificant Israeli settlement about twelve miles north of Samaria, Israel’s capitol. The city wasn’t much to look at—about 10 acres in size—and there wasn’t anything worth defending there for the residents never bothered to build a wall. The only defense system in evidence today is a stone rampart from an earlier period that was pressed into service and, as ancient walls go, was of no significance.

But Dothan was of great significance to Elisha for there were Israelites there that had not yet bowed the knee to Baal and kissed his feet.

On one occasion when Elisha and his servant were residing at Dothan, Ben Hadad, the Syrian King, besieged the city in order to kill the prophet. He had good reason for Elisha had been supplying Israel’s King Jehoram with intelligence about Syrian military movements.

The Syrian army gathered by night, surrounded the city, sized up the situation, decided the city was nothing to worry about, and bedded down for the night.

Early the next morning, Elisha’s disciple awakened and began making preparations to return to their permanent residence in Samaria (6:32). He looked over the wall and discovered to his dismay “an army with horses and chariots surrounding the city.” He ran to alert Elisha and cried out in despair,  “Oh, my lord, what shall we do?”
“Don't be afraid,” Elisha said. “The odds are in our favor.” Or words to that effect.

Then Elisha prayed, “Lord, open the young man's eyes so that he may see.” So the Lord opened his eyes and he "saw the hills full of horses and chariots of fire all around Elisha.” He saw the legions of heaven at God's disposal, against which Syria’s forces were powerless.

Seeing into the unseen world, as I have written before, is a mark of spiritual maturity. It’s an insight that assures us that we are never at loose ends. We may feel small and insignificant in the face of present danger, but “the chariots of God are myriads; thousands upon thousands” (Psalm 68:17). God and a googol of angels encircle us.

This does not mean that we will not be overrun from time to time. Indeed we will. “Disturbances, troubles, wars, captivities, cries, groans, and frights,” may assault us, as Mr. Sagacity assured Bunyan’s hard-pressed pilgrim. Despite our best efforts Corvid-19 may overwhelm us. We and our loved ones may sicken and die. But we are safe, shielded and sheltered by God’s power unto eternal salvation (1 Peter 1:5). As Jesus said with such fine irony, they may kill us, but not one hair of our head will perish (Luke 21:18).

And, in the interim, God is with us in the moment, wherever we are and whatever our circumstances may be. He is here to meet each emergency as it arises. This is not a new condition: “His is the presence in which we have ever been.”

He is pleased when, though we cannot see him, we speak to him as though we were looking into his face. We can say with confidence, “He is in this place.”

This is a solid fact on which we stand and with which we can meet the present hour in peace. We can put God and his armies between us and all that we fear.
When at length
the day is through,
shall I find
I failed to tap
the Infinite Resources
forever open to the weak
who seek (Ruth Bell Graham).
David Roper
Adapted from the chapter “Dothan” in Seasoned With Salt.
- March 19, 2020 1 comment:

Until the Present Troubles Cease

We like to see closure, the end line, the respite, but God never tells us when our troubles will cease. We must then trust Him in the moment, and “let patience do its perfecting work" (James 1:3). God's goodness and love is sufficient for today (6:4).

Let our hearts then turn to Heaven,
where God bides his time in peace.
Giving him our heart's devotion
till the present troubles cease.

On Eagle’s Wings Have you not known? Have you not heard? The LORD is the everlasting God, the Creator of the ends of the e...