Going and Not Knowing

"By faith Abraham obeyed when he was called to go out to a place that he was to receive as an inheritance. And he went out, not knowing where he was going” (Hebrews 11:8).

When Abraham was seventy–five years of age, God called him from his home in Ur of the Chaldees to move to Haran, and then to Shechem, to Bethel, to Egypt, to the Negev, to Hebron… Rootless, homeless, “going…and not knowing.” That was the story of Abraham’s life.
Age brings change, uncertainty, adjustment, transition from a familiar past to an uncertain future. It is movement from a family home, to a small apartment, to a retirement community, to a nursing home—the “last resort,” as one wag put it.
So we, like Abraham, pass through paths unknown, making our way from one place to another, always traveling: “going…and not knowing.”
But we could not be more safe for we dwell in the shelter of the Most High; we rest in the shadow of His wings. The "God of old" is our dwelling place and underneath are His everlasting arms (Deuteronomy 37:27).
Others may choose another habitation, but God is my dwelling place til traveling days are o'er and I reach my heart's true home. My days may be uncertain but my destination is secure: the place our Father prepared for His children long ago (John 14:1-4).
David Roper7.10.22
Please note: This will be my last post for awhile. I’m taking a break and “recalibrating” as my Google map app would say.
- July 09, 2022 2 comments:

The Mountain of God

Let snow fall on Zalmon,
O mighty mountain, mountain of Bashan;
O many-peaked mountain, mountain of Bashan!
Why do you look with envy, O many-peaked mountain,
at the mount that God desired for his abode,
yes, where the LORD will dwell forever?
—Psalm 68:14-16
Mount Zalmon is located in a chain of perennially snow-capped mountains between Lebanon and Syria with peaks that rise over 9,000 feet. In Canaanite mythology it was Baal's abode.
Yet mighty Zalmon, a massive eminence, looks at little Mount Zion (2,300 feet) with "envy" for God has chosen it, as his dwelling place forever. And…
It shall come to pass in the latter days
that the mountain of the house of the LORD
shall be established as the highest of the mountains,
and shall be lifted up above the hills;
and all the nations shall flow to it… (Isaiah 2:2).
I’m reminded here of Peter’s words: “Clothe yourselves, all of you, with humility toward one another, for “God opposes the proud but gives grace to the humble. Humble yourselves, therefore, under the mighty hand of God so that he may exalt you at the proper time” (1 Peter 5:5).
So then, I say: I don’t have to be an mighty, “many-peaked” mountain to matter. I can be a little hill.
David Roper
6.22.22
- June 22, 2022 No comments:

I am the LORD your God, who brought you up out of the land of Egypt. Open your mouth wide, and I will fill it. —Psalm 81:10 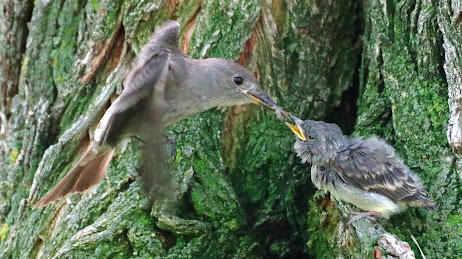 This verse begins with a direct quotation from the preamble to the Ten Commandments: “I am the LORD your God, who brought you up out of Egypt. Thou shalt not; thou shalt not; thou shalt..." (Exodus 20:2).
Here in this psalm, however, where you might expect another list of rules, God offers a lovely grace-note: “Open your mouth wide and I will fill it."
Israel's history, like mine, is a tale of underachievement, yet God does not call for greater effort. He rather asks us to lay our "doing" down and receive what He has to give.
Trying to keep rules and make myself  a better person is a losing cause. I know because I tried it for years. God alone is the source of goodness for He alone is good. We must ask for his righteousness and keep on asking.
Long, long ago, on the Cross, Jesus did away with our wrong-doing. Now He lives to make us good children. If we open our mouths wide He will, in his time, fill us with love, joy, peace, patience, and all the other traits we admire in Him and seek for ourselves. He will feed us with the "finest of the wheat," and satisfy us with "honey from the rock" (Psalm 81:16).
"Honey from the rock!" Sweetness flowing from an unexpected source. Who could imagine that someone so "wholly other" could be so near at hand?
Weary, working, burdened one,Wherefore toil you so?Cease your doing; all was doneLong, long ago. —James Proctor
David Roper
5.30.22
* Photograph taken by our neighbor, Duane Gray. Used by permission.
- May 30, 2022 No comments:

Think on These Things

“Summing it all up, friends, I'd say you'll do best by filling your minds and meditating on things true, noble, reputable, authentic, compelling, gracious—the best, not the worst; the beautiful, not the ugly; things to praise, not things to curse” (Philippians 4:8 The Message).

It’s generally thought that Paul had abstract thought in mind (right thinking) and that may have been his intention. I wonder, however, given the context of the book, if Paul is not encouraging us to think about the “things” that we observe in others.
Rather than fixing our minds on the flaws we see in our brothers and sisters would it not be better to think about those attitudes and actions that are “true, noble, reputable, authentic, compelling, gracious—the best, not the worst; the beautiful, not the ugly; the things to praise, not the things to curse?—the goodness that we see.
Rather than see, think and speak evil of others, would it not be better to fill our minds with these “things.”
David Roper
- April 29, 2022 No comments:

The Life of Riley

"I would love to believe that when I die I will live again, that some thinking, feeling, remembering part of me will continue. But as much as I want to believe that, and despite the ancient and worldwide cultural traditions that assert an afterlife, I know of nothing to suggest that it is more than wishful thinking." —Carl Sagan

Good Morning, Friends,
So much of the world is in turmoil these days. As I look around so many of our friends have a measure of turmoil, pain and grief in their homes and in their hearts. Perhaps you can relate. Whether it's that one child who is always on your mind, or the next doctor's appointment for a health issue that does not go away, or too much month at the end of the paycheck. Or perhaps it is decisions that keep stacking up and you just don't know what change will bring.
As I was thinking of the muddles of life and the turmoil they can stir up in a heart,  it reminded me of something that happened years ago in Palo Alto.
David and Ron Ritchie were asked to officiate at a funeral for the son of a missionary couple they knew. The young man rode with the Hell's Angels and died of a knife attack in San Francisco. The funeral was held in the woods in a basin in the Santa Cruz mountains. A large number of the Hells Angels all rode up together on their bikes. After the service where Jesus and the gospel were presented, the leader of the Angels came up to David and said,
"I've got a putt and a pad and my 'ole lady, but I ain't got no peace."
Sometimes in the turmoil we all realize we "ain't got no peace." Well, how do we get the peace God has promised, even after we have peace with Him?
Psalm 131 has been on my mind recently.

A song of ascents. Of David

1 My heart is not proud, Lo, my eyes are not haughty; I do not concern myself with great matters or things too wonderful for me. But I have calmed and quieted myself. I am like a weaned child with its mother; Israel, put your hope in the Lord both now and forevermore.
I love that picture of a toddler resting on his mother, no fuss, no demands, no trauma. Just peace. And I have come to see it is possible to rest childlike on God and be at peace if we have done the two things above this picture. First, the psalmist had humbled himself before the Lord, not demanding or a proud look at the situation. Next, David realized and agreed that some things he will not understand. But God does. So David could rest peacefully and be content.
It wasn't that David just said, "Whatever." or "Oh well." But he was learning to trust God for the future. As he put his hope in the Lord he could wait in peace. Even when he did not understand. He knew the Lord as the child knew his mother.
This is not a one time thing, of course. But it is a posture we can take over and over.
Today I am praying for you to keep the picture of the peaceful child in your heart as I am praying to keep it in mine. I am praying you will find the  "peace that passes understanding" as you learn that the Lord is worthy of ruthless trust,  It's a process. The Holy Spirit is our Helper.
With Love from Above,
Carolyn
- April 09, 2022 1 comment:

Going and Not Knowing

"By faith Abraham obeyed when he was called to go out to a place that he was to receive as an inheritance. And he went out, not knowing...